A Soldier’s Journey
~by John Donnelly

Prelude: The Pentagon now admits the drone strike ordered by the commander-in-chief in retaliation for the Afghan killing of 11 marines, 1 Navy corpsman and 1 soldier did not kill any terrorists but did kill 10 innocent civilians, including 7 children. 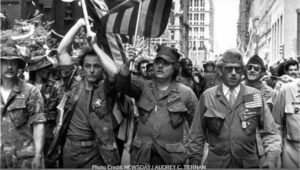 Sixteen years after my being wounded on a battlefield in Vietnam, I marched in a New York City parade tolled as an event to honor the Veterans of that war. This staged event ran shallow and flat.

After America’s tragic loss and bloodletting in Vietnam, details came to light regarding the questionable management of that war. Myself and the Marines I marched with had first-hand experiences with the ineffective policies proffered by our government in the prosecution of that war.

Of particular note was the “body count” strategy, which kept baseball type scoreboards posted in command posts tallying the numbers of Vietnamese killed each day, compared to our soldiers killed in action on that same day. A running tally was kept and displayed. This count would determine which side was winning the war.

This poorly thought-out strategy for the guerilla war-type action we fought in Vietnam was authored by desperately incompetent leaders, corrupted by their many years of ineffectiveness. It was rift with abuse and misapplication. It incentivized the killing of Vietnamese civilians in order to keep the numbers up. Washington just needed Asian bodies.

After the parade I searched the crowd for a familiar face. None were there. They had been left behind in the jungles of Southeast Asia.

I embraced my fellow Marines. We were filled with profonde emotion, and we reluctantly went our separate ways. We didn’t know what else to do. It was a bewildering scene of loss and waste, a disturbing and heartbreaking end to a barbaric and unnecessary war that lasted for 16 years.

During the subsequent years we waved American flags, had more patriotic events and parades, while enlisting politicians to positively spin and sugar coat the failed leadership and strategies that had brought defeat and suffering into our lives (and 2 million dead Vietnamese).

The firmly entrenched military industrial complex by means of its wealthy lobbyists, has never stopped pumping enormous sums of money into the hands of our politicians and their deep state allies. No matter what the casualties of war may be, victory or defeat, outrageous profits are guaranteed to the backers of this murderous enterprise.

Taxpayers fund this destructive complex and voters elect the politicians that carry out their wishes. 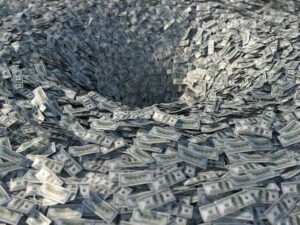 Yearly payments from those profiting from this military industrial complex to our politicians totals about  $153 million. These elected officials and their bureaucratic appointees are given this money to maintain the viability and aggressive nature of our war machine, as it seeks fulfillment in  targeted locations throughout the world. This quid pro quo arrangement has provided trillions of dollars of profit for the industries of war, while keeping the political class plush with cash. All these activities are funded by the American taxpayer. We’ve created this merciless and powerful corporate/political alliance.  Innocent children and families round the world have endured insurmountable suffering and death at their hands.

Classified documents now detail the lies and misinformation given to the American people regarding the Gulf of Tonkin Incident that got us into the shooting war in Vietnam. Remember the weapons of mass destruction lies from Iraq? Untruths manipulated by our politicians to warrant an invasion and occupation of Iraq for 8 years.

After 20 years of slaughter, we’re suffering another debacle and defeat in Afghanistan. Americans were abandoned and left behind enemy lines, as our military hastily retreated, leaving those stranded to be captured and imprisoned as hostages. Reprisals against them have been initiated. Door to door searches are being conducted to located these forsaken Americans and their allies. Murders of those forsaken have already begun.

The residue of another dark humiliation and uneasiness are upon us and the rest of the world at the hands of our illustrious leadership in Washington. Remember the “mission creep” justifications given to extend the bloodletting in that nation? America was going to maintain a presence there in order to “democratize the Afghan tribes and people”.

My experience, analysis and assessment have brought me to a point where I can no longer perpetuate the myth that our government leaders, military elites, politicians and deep state operatives; authentically value and care about the well-being of the men and women they send off to be slaughtered fighting in these worthless wars.

Waving flags, saying nice things and paying one’s respect to the fallen and wounded members of our Armed Forces are the right things to do. However, it doesn’t heal nor bring back to life those barbarically killed in battle. It doesn’t put back together the torn bodies and minds of those seriously wounded in combat. 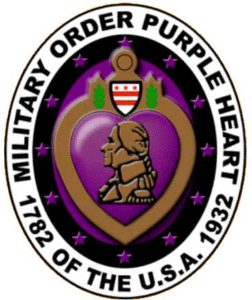 Déjà vu and common sense lent clarity to the impending disaster that awaited us if we invaded Iraq. Seeking some relief from my internal pain, I stood on US 1 for 30 days with my Purple Heart and United States Marine regalia, protesting against the anticipated invasion of that nation. Reckless, incompetent and ignorant leadership from America’s top executives, eventually swayed the American public to believe their WMD lies and misinformation. These corrupt and feckless amateurs, posing as responsible members of society pulled the trigger; initiating a devastatingly destructive invasion of Iraq. This bloodbath has seriously destabilized the entire region up to and including today. Some say that was the start of World War III.

During my lifetime the ruling class has been paid handsomely from their war mongering. But not so much for those considered the “disposable others”. 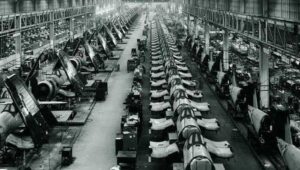 War materials will continue to be massively produced, purchased and profited from, as our lap dog government leaders lick the boots and grovel for the crumbs beneath the tables of their money masters. These engineers of war will collaborate and target their next location to launch another police action, conflict, or war. These instruments of death will continue to be purchased and dispatched for the killing that awaits those forced to endure our next ill-conceived military assault and occupation.

These dastardly deeds are compliments of an American citizenry that accepts and tolerates murderous decisions, lies and barbarous conduct from their leaders. The politicians our electorate continues to vote back into office, are in many instances, the same flawed lackeys deficient in integrity, honor and ethics, who continue to perpetuate these endless cycles of war and unrest. 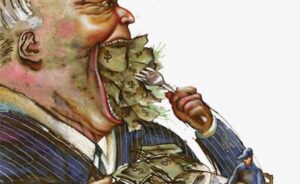 These politicians do exactly what they’re paid and told to do. They’ll continue to receive money, backing and support from their industry bosses. These charlatans are in fact only cheap two-bit frauds serving as hired guns on the payroll of their corporate masters to keep spinning the engines of war.

A Godless and inhumane nation will rot from within. The societal structures enabling this malfeasance will crumble under the weight of its perversion and decadence. A culture that sanctions policies, which sets its soldiers up for failure or, as we have seen, to be killed and wounded while causing death to innocent children and civilians, is not fit to maintain its viability as a nation. 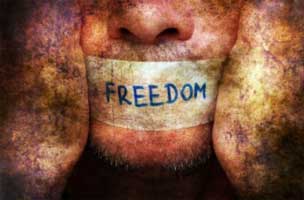 Not allowing for a robust debate, concerning these issues of life and death, has allowed government leaders to set the narrative and act barbarically. They’re not asked hard penetrating questions, nor are their statements authentically evaluated and challenged.

Repression of free speech, along with censoring and punishing individual’s right to express their ideas, while causing them to live with the fear of being harmed and injured for their beliefs, delegitimizes the legal authority of a civilized nation to govern them.

Our rapid decline and descent into servitude is not an exaggeration, nor a secret. Unfortunately, many citizens of a once noble and self-determined nation have become willing accomplices for their government and corporate overlords.

The departure from a nation that once prioritized and codified our individual rights and liberties as citizens, along with the malevolent policies and decisions generated by, what appears to be, a tyrannous leaning central government; have all culminated in a strategic plan division that has divided and pitted Americans against one another; while the real threats to our peace, tranquility and freedom remain hidden in plain view. 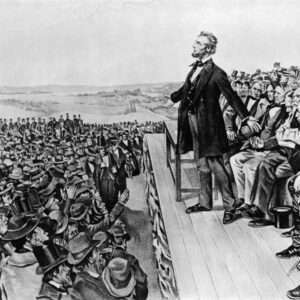 In honoring the Soldiers killed during the Battle of Gettysburg, Abraham Lincoln identified their sacrifice as having been made so: “That a government of the people, by the people, for the people, shall not perish from the earth”.

Reconciling myself with President Lincoln’s words, while processing my experiences as a member of a family that was awarded 5 Purple Hearts over 3 successive generations, I’m forced to deal with another double-dealing betrayal in the form of our defeat in Afghanistan. The trauma and stress triggered within every Veteran I’ve spoken to by a series of long-standing betrayals, treachery and disloyal conduct, have cut to and ripped out the souls of the men, women and families.

Simultaneously, our government leaders and media pundits are relentlessly focusing on ginning-up their divisive rhetoric and fear based narrative, while ridiculing the ideas and lives of many millions of Americans with whom they disagree. An objective and analytical analysis of the facts exhibits the many twisted ideas and distortions these malcontents offer as truths. As a point of reference, a section of the testing on the college boards when I took them was identified as “analytical reasoning”. I secured a perfect score.

Our insane obsession with war, coupled with the shear madness of a new normal mandating immediate obedience to an overreaching government, has brought us to the tipping point. Left unchecked these fatal de-evolutions will turn our country into a iron-fist-ruled wasteland. Abandoning what is right for convenience’s sake, or just to get along, will be the cause of a gradual and painful death for the liberty we once enjoyed.

We’ve got a blueprint and design for living that can restore our nation’s honor and integrity. This outline is set forth in detail via the law of our land, enumerated with so much specificity in our Constitution and Bill of Rights.

The disturbing realignment of America has caused me to shift my priorities. I’m wearing the garments of this material world lightly, while riding loosely in the saddle of life. I’m discarding the delusive nature of what some term reality, while uplifting and expanded my consciousness and spirituality with the assistance of my God. Seeking to broaden my understanding and deepen my relationship with the Creator has been reassuring and rewarding.

On one level, I’m grateful for all the betrayal, treachery, lies and political underhandedness that our government and media are responsible for. It has helped me to get my mind right. In a way, it has been the blessing I’ve been seeking. I’ve been forced to seek peace and comfort from its only true and original source. Looking outward for something that can only be found within is a fool’s errand. Pursuing, getting glimpses, and wanting to love God, is a good thing.