I met her decades ago. She was cool. I was in my 20s and I think she may have been in her 60s? My memory fades a bit. I’m 60 now. She still had the real estate office at the time. It was an old wooden building between Little Palm Island’s shore station and Dolphin Marina. At that time Charlie and Jean Lovering owned the marina and apartments. They sold it to Little Palm Island in the 90s. Her dolphin’s names were Dal and Suwa. They would follow us when we went tubing and skiing in Pine Channel. They roamed freely and would hang by the boat. I still have her paperback Dolphin Love, I got at her office. Rick’s Marine was next to her office. I think Hurricane George’s took out the buildings. The dolphin’s pen and lagoon was on the other side of the hard ledge to your starboard heading in to the marina. You could go and watch them feed the dolphins in the am and pm. My girlfriend and I used to go over and watch them a lot. They wouldn’t go under the bridge. They had gotten lost in the 60s and were afraid. They had almost starved when they were lost, as the story goes. They would go out to the end of Jolly Roger Estates and hang out in the channel. I looked forward to seeing them on the weekends and a big sea turtle that used to hang in the channel also. 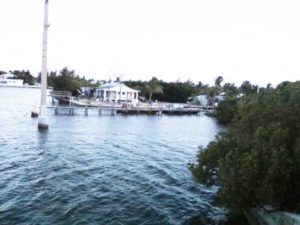 Dal died of old age, late 20s. It was sad. Suwa was so heart broken and lonely. He’d try to get the wild dolphins that used to roam in the channel to join him, but they just cruised around and split. You could talk to him and he’d hang near to the boat. They were big. We were always cautious getting in and out of the raft when they would just dangle their selves in an upright position, their tails gracefully just hovering there. They had their space and there was mutual respect. You would see Suwa when you pulled up for gas at the marina. He’d swim through the canal at the time. There was a guy that jumped off the dock at the marina one day. Story goes he was drunk and tried to play “Flipper” with Suwa. Suwa butted him and broke his rib or something. Idiot should have known better. So they had to keep Suwa penned from then on.

Suwa was caught in a mackerel net when he was around 4. He was hauled out in the trawler and taken to Marathon by a fisherman named Santini. Santini had a reputation of being a captor and handler of dolphins. His pet dolphin, Mitzi, was the star of the first “Flipper” movie. Eventually they brought Suwa to Betty’s as a pal for Dal.

This is a piece of our lower Keys history. As I ventured around the Keys through the years. I always grab the local writings. They’re the cool stories that disappear. You don’t find them in a book on Amazon. Thanks for asking about this. It brought back a lot of good memories for me. So much has changed in, what seems like, not that long ago. 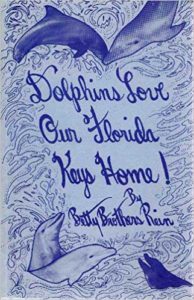