10am Big Pine Library
Third Saturday of the Month
(305) 872-0992
Call Theresa at 305-731-5532 to arrange to get a copy of the book
or pick one up at the next meeting.
All adults are welcome to attend. For more information, please contact, BPKLibraryfriends@gmail.com

The Shadow of the Mountain
by Silva Vasquez-Lava

Endless ice. Thin air. The threat of dropping into nothingness thousands of feet below. This is the climb Silvia Vasquez-Lavado braves in her page-turning, pulse-raising memoir chronicling her journey to Mount Everest.

A Latina hero in the elite macho tech world of Silicon Valley, privately, she was hanging by a thread. Deep in the throes of alcoholism, hiding her sexuality from her family, and repressing the abuse she’d suffered as a child, she started climbing. Something about the brute force required for the ascent—the risk and spirit and sheer size of the mountains and death’s close proximity—woke her up. She then took her biggest pain as a survivor to the biggest mountain: Everest.

When a killer strikes just before flan time, beloved food critic Hayley Snow is forced to sniff out the killer before someone else bites the dust.
Hayley Snow, fiery food critic for Key Zest magazine, has just landed a ticket to one of the most prestigious events in Key West: a high-brow three-day conference at the Harry Truman Little White House. Even though she’ll be working the event helping her mother’s fledgling catering business, there’s plenty of spicy gossip to go around. But just before her mother’s decadent flan is put to the test, Key West’s most prized possession, Hemingway’s Nobel prize gold medal for The Old Man and the Sea, is discovered stolen from its case.

BONUS: New York Times’ bestselling author, Lucy Burdette, will be joining us live and in person!

The improbable, intimate account of how nine working-class boys from the American West showed the world at the 1936 Olympics in Berlin what true grit really meant.

It was an unlikely quest from the start. With a team composed of the sons of loggers, shipyard workers, and farmers, the University of Washington’s eight-oar crew team was never expected to defeat the elite teams of the East Coast and Great Britain, yet they did, going on to shock the world by defeating the German team rowing for Adolf Hitler.

Saturday November 19, 2022 at 10am
The Lighthouse Keeper’s Daughter
by Hazel Gaynor.

The New York Times bestselling author of The Girl Who Came Home, Gaynor creates a historical novel inspired by true events, and the extraordinary female lighthouse keepers of the past two hundred years.

In June, 1954, eighteen-year-old Emmett Watson is driven home to Nebraska by the warden of the juvenile work farm where he has just served fifteen months for involuntary manslaughter. His mother long gone, his father recently deceased, and the family farm foreclosed upon by the bank, Emmett’s intention is to pick up his eight-year-old brother, Billy, and head to California where they can start their lives anew. But when the warden drives away, Emmett discovers that two friends from the work farm have hidden themselves in the trunk of the warden’s car. Together, they have hatched an altogether different plan for Emmett’s future, one that will take them all on a fateful journey in the opposite direction—to the City of New York.

Spanning just ten days and told from multiple points of view, Towles’s third novel will satisfy fans of his multi-layered literary styling while providing them an array of new and richly imagined settings, characters, and themes.

What if you found out that your family isn’t yours at all? How far would you go to protect them? A gripping new psychological thriller from the bestselling author of The Girl Before. . . .

In the summer of 1932, on the banks of Minnesota’s Gilead River, Odie O’Banion is an orphan confined to the Lincoln Indian Training School, a pitiless place where his lively nature earns him the superintendent’s wrath. Forced to flee after committing a terrible crime, he and his brother, Albert, their best friend, Mose, and a brokenhearted little girl named Emmy steal away in a canoe, heading for the mighty Mississippi and a place to call their own.

Over the course of one summer, these four orphans journey into the unknown and cross paths with others who are adrift, from struggling farmers and traveling faith healers to displaced families and lost souls of all kinds. With the feel of a modern classic, This Tender Land is an enthralling, big-hearted epic that shows how the magnificent American landscape connects us all, haunts our dreams, and makes us whole

The story of a champagne empire and the woman who ruled it. Veuve Clicquot champagne epitomizes glamour, style, and luxury. But who was this young widow – the Veuve Clicquot – whose champagne sparkled at the courts of France, Britain, and Russia, and how did she rise to celebrity and fortune?

In The Widow Clicquot, Tilar J. Mazzeo brings to life for the first time the fascinating woman behind the iconic yellow label: Barbe-Nicole Clicquot Ponsardin. A young witness to the dramatic events of the French Revolution and a new widow during the chaotic years of the Napoleonic Wars, Barbe-Nicole defied convention by assuming – after her husband’s death – the reins of the fledgling wine business they had nurtured. Steering the company through dizzying political and financial reversals, she became one of the world’s first great businesswomen and one of the richest women of her time.

Numerous acquaintances of the legendary Edgar J. Watson, said to have gunned down the outlaw Belle Starr, are given voice in a fictionalized oral history set in the Florida Everglades. This is an imaginative and haunting evocation of a time and place, and the paradox of the tenderness and brutality with which real and imagined lives are filled. South Florida history has never been so interesting a read.

An emotional, rousing novel inspired by the incredible true story of two giraffes who made headlines and won the hearts of Depression-era America.

“Few true friends have I known and two were giraffes…”

Woodrow Wilson Nickel, age 105, feels his life ebbing away. But when he learns giraffes are going extinct, he finds himself recalling the unforgettable experience he cannot take to his grave.

It’s 1938. The Great Depression lingers. Hitler is threatening Europe, and world-weary Americans long for wonder. They find it in two giraffes who miraculously survive a hurricane while crossing the Atlantic. What follows is a twelve-day road trip in a custom truck to deliver Southern California’s first giraffes to the San Diego Zoo. Behind the wheel is the young Dust Bowl rowdy Woodrow. Inspired by true events, the tale weaves real-life figures with fictional ones, including the world’s first female zoo director, a crusty old man with a past, a young female photographer with a secret, and assorted reprobates as spotty as the giraffes. 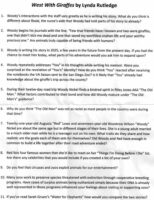 Part adventure, part historical saga, and part coming-of-age love story, West with Giraffes explores what it means to be changed by the grace of animals, the kindness of strangers, the passing of time, and a story told before it’s too late.

In 1922, Count Alexander Rostov is deemed an unrepentant aristocrat by a Bolshevik tribunal, and is sentenced to house arrest in the Metropol, a grand hotel across the street from the Kremlin. Rostov, an indomitable man of erudition and wit, has never worked a day in his life, and must now live in an attic room while some of the most tumultuous decades in Russian history are unfolding outside the hotel’s doors. Unexpectedly, his reduced circumstances provide him entry into a much larger world of emotional discovery. Link

“Exactly the book I needed to read right now—I laughed, I cried, and in the end I was left with a renewed belief that there’s always hope for all of us, no matter how broken or stuck we may feel.  This deft, compassionate story about the enduring power of friendship and the sparkling promise of a fresh start will stay with me for a long time. It’s simultaneously heartbreaking and uplifting, and I loved it.”  —Abi Daré, New York Times bestselling author of The Girl with the Louding Voice

“You’ll love cheering for the likable loners in this kind-hearted, hopeful, and beautifully detailed story. I adored The Music of Bees.” —J. Ryan Stradal, bestselling author of The Lager Queen of Minnesota

“A story for this unique time about three people trying to mend their broken lives [that] tells of the power inside each of us that builds the sweet life we want even if we don’t get there the way we had dreamed. It’s exactly the book we need after a year of uncertainty.” —The Spokesman-Review

Saturday January 29 at 10:00 am
The Last Mona Lisa
by Jonathan Santlofe

The book club selection for January is The Last Mona Lisa by Jonathan Santlofer. “Unstoppable what-happens-next momentum.”—Michael Connelly, #1 New York Times bestselling author
“A deliciously tense read.”—Ruth Ware, #1 New York Times bestselling author and award-winning crime writer and celebrated artist Jonathan Santlofer comes an enthralling tale about the 1911 theft of the Mona Lisa from the Louvre, the forgeries that appeared in its wake, and the present-day underbelly of the art world. Link

Many people dream of escaping modern life, but most will never act on it. This is the remarkable true story of a man who lived alone in the woods of Maine for 27 years, making this dream a reality; not out of anger at the world, but simply because he preferred to live on his own.