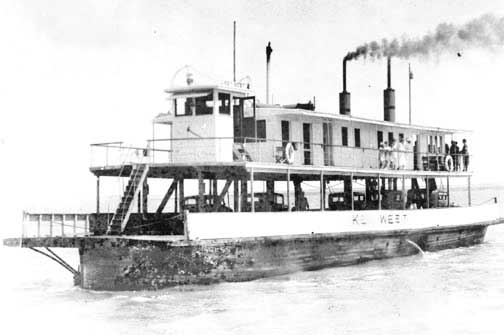 This is a photo of the ferry that worked the Keys. Did the old ferry go from No Name Key to Grassy Key? No. It docked at 11 Street (bayside), Marathon, also know as Hog Key, also know as Pig Alley, then on to Grassy Key. It went to Lower Matecumbe Key. Here’s a little info.
Dade County was to build 11 miles of road from Florida City to Little Card Point, a point of land between Card and Barnes Sound. Monroe County was to build a drawbridge and connect the Dade road to the existing North Key Largo road. Before it could be completed, the roadway and bridge were severely damaged by the hurricane of 1926. It was decided to raise the bridge height from five to nine feet. Tidewater Construction Company was the original bridge contractor, but S. J. Groves Co. did the final modification and repair. Awaiting for its completion, in March of 1927 a barge-type ferry towed by a powerboat transported cars from Florida City to the east end of the Card Sound bridge. This was known as the Key Largo Ferry and the point was known as Pelican Harbor. Meanwhile, Jenner Construction made the road serviceable as far as Islamorada. Another feat was using the car ferry to cross to the mainland, J. Otto Kirchheiner, chairman of the Monroe County commissioners, was the first to drive a car from Key West to the mainland on July 18, 1927.
By 1928, the rebuilt and higher off the water 2,800-foot wooden drawbridge across Card Sound was completed. The additional road and bridges were completed to Lower Matecumbe Key. The Upper Keys were connected to the Florida mainland. In the meanwhile, Key West had built a road as far as No Name Key. Construction of a ferryboat pier began at Lower Matecumbe and No Name Key.

To complete the circuit to Key West, on January 16, 1928, three ferryboats at a cost of $850,000 from the Gibb’s Shipyard of Jacksonville were put into operation between Lower Matecumbe Key and No Name Key. One ferry would go south and one ferry would be returning north. The third was kept in reserve or in maintenance. However, one ferry burned eight months later. Officially for the public the OSH opened January 25, 1928.

This was a 41-mile ferry trip. Each ferry could take 20 cars and the trip took about four hours. The toll was $3.50 for vehicles under 14 feet up to $6.50 for vehicles over 16 feet, driver included. Passengers were charged $1.00 each. When completed from Florida City to Key West, it was designated State Road 4A. This is now known as Monroe County Road 905. A little over two years later in 1931, a 13 1/2-mile road was completed across the Vacas Keys with ferry terminals on Grassy and Hog Keys. This reduced the ferry trip to two 14-mile water gaps and provided Marathon with automobile service from the other Keys. In reality, it seems that they only made a real effort to serve Marathon in the winter months.
This original highway was designated as State Road 4A just as the road from Miami to Homestead was. The designation of U.S. 1 did not come until federal funds were used to improve the vehicle access for the Navy to Key West during WW II. The SR-4A route was shortened by about 14 miles by using the already acquired railroad right-of-way. This new route became highway U.S. 1. To see a 1933 road map click here. CLICK
The total road cost was now close to $4,000,000. This accounted for a complete highway system and a lot of improvements in Key West. During this time, trains also provided service through the Keys. The day-to-day needs of the Upper Keys were served better by delivery trucks, buses, etc. that would make intermediate stops in-between the train depots. Small cottages for fishing, weekends, or just to get away from the city started to appear. Charter fishing began to appear. Farmers slowly abandoned their fields.

Tavernier resident Captain Cliff Carpenter remembers the old highway as a bumpy rock road when he first drove his new, green 1928 Chevrolet coupe down from Miami. Later, Captain Cliff remembers the Florida Motor Lines bus and the Overseas Freight Line vehicles passing back and forth where the northbound traffic lane of U.S. 1 is now. The railroad was where the southbound lane is located